Naval powerhouse and scourge of reavers

A scion of a once-powerful noble family dispossessed and toppled by rivals on the forge world of Omnicron-71-DX. A successful career as an officer of the Imperial Navy was cut short by his family’s fall from power. A known sharpshooter he was suspected in the assassinations of several prominent nobles and underworld figures before joining up with Trantor Zarkhov as Chief battery commander on the Optima. He subsequently served as Fleet Captain and Master of the Ordnance aboard the Blood before being made Admiral of the Zarkhov fleet. His personal flagship is the Arbalest, a heavily modified Dauntless light cruiser. Fletcher is the scourge of the pirates of the expanse and earned the moniker ‘Long-Drop’ for his fondness of the noose as the best way to end any trial. 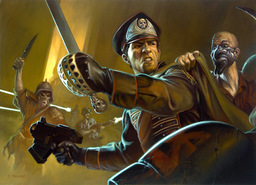