The second son of Lord-Confessor Thaddeus Patronius. Victris entered the Ministorum but finding no outlet for his ambition in the stuffy priesthood left to do missionary work on the fringes of the Imperium. He took with him his family’s most sacred relic – the bionic left-hand of Drusus himself. He has since had it crafted into a fearsome power weapon to bring destruction to Daemon, xeno and heretic alike. He signed up with House Zarkhov in Footfall but retains strong ties to his noble House. 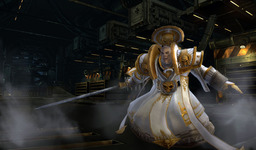