A former Imperial intelligence officer. Born to a wealthy noble family he signed up with House Zarkhov after leaving the service. Like Angin Rook he was marooned on Footfall 40 years ago but the pair managed to keep a small Zarkhov operation going there in spite of terrible difficulties. On the return of House Zarkhov to the Expanse he was promoted to Seneschal aboard the Mentis Optima ahead of Bursar Ivanova who remains in Footfall overseeing House interests there. 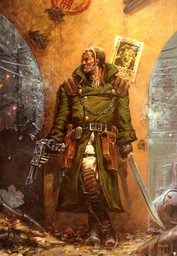