A navigator of the renegade House Echo. He was raised on the forge world Perinetus in the Adrantis subsector and served his house well as a navigator aboard several traders until he became involved in an Inquisition investigation into cold trade activities. After an unpleasant period of indentured servitude to Inquisitor Lucien Trask he escaped and made his way to Footfall. There he secured employment with House Zarkhov as navigator on the Optima. 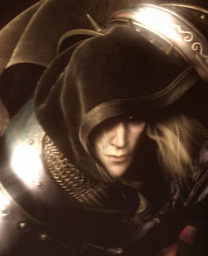