A man for all seasons

A noble with a shady past. Karl was once a high ranking naval officer and bomber-ace but is under sentence of death after allegedly being involved in the destruction of the Emperor Class battleship Eagles Vanguard. On the run from an arbitrator kill-squad he fled to the Expanse and was pressed into service with some corsairs where his naval background and talent for jury-rigging tech served him well. He rose to second in command on his pirate vessel before it was taken as a prize by House Zarkhov. After a failed mutiny which saw all of Karl’s co-conspirators executed Deacon Patronius decided to spare his life and took him on as his bodyguard to ‘reform’ him. Karl knows the powerful cleric is his only chance at getting the slate wiped clean and is anxious to serve well. The Lord-captain was not a fan but Karl’s bravery in the Battle of Taranis has earned him some trust. 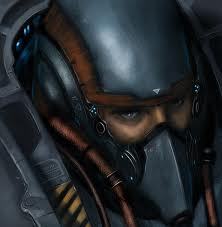